I've Been Suicidal Most of My Life 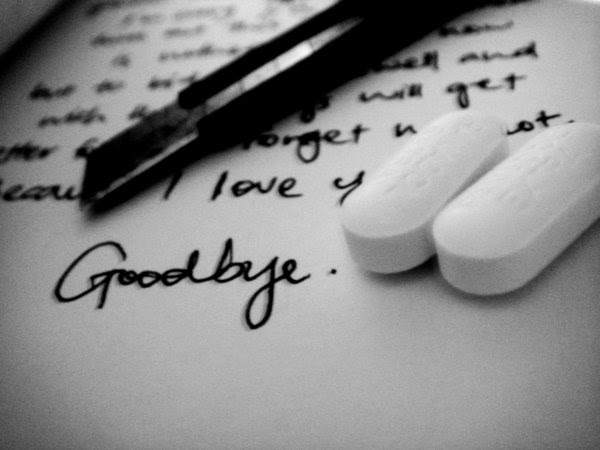 This morning I went to a funeral of a dear student I was privileged to know well during my substitute teaching days. She had committed suicide. Everyone I talked to at the funeral kept saying "I don't know why anyone would do such a thing". I would respond in my mind "I do". It's all too familiar to me.

My first attempt...I don't remember my exact age, but I know I was around eight. I went to my dads closet where I knew he kept his guns. They were in a locked metal box, but there was a revolver in a green sock. I got it down from the top shelf and slipped it out of the sock. I was disappointed, it had some kind of lock around the trigger that I couldn't get off. I put the gun back and went back to my room.


It's not about killing yourself. It's about ending the pain. The pain of worthlessness. If I ran away I would still be stuck with me, the only way to really end the pain is to end me.

I would always fantasize about my funeral.  My spirit hovering above the crowd to see if anyone would show up. It was kind of a "I told you so" statement. "I told you I was worth something, but none of you could see it. Do you see it now?" My funeral was the only way for me to get the attention, the help, I was screaming for inside myself. 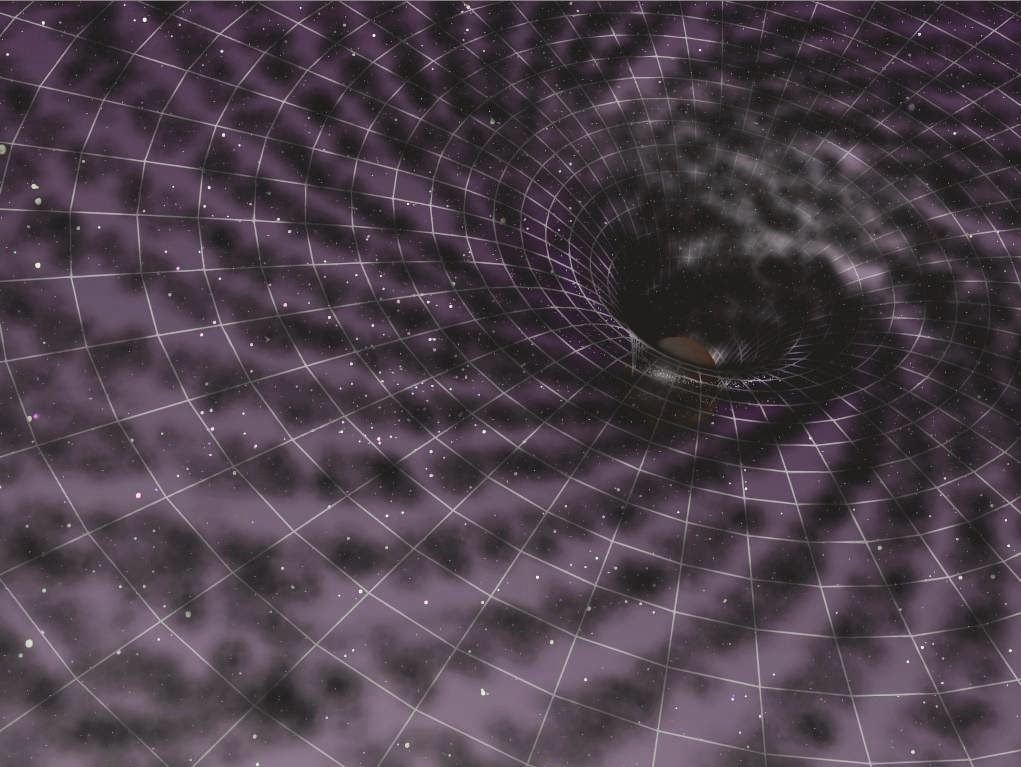 Black Holes and depression are one and the same. Swirling darkness. If happiness attempts to escape it gets sucked back in by the forces of depression, they are much stronger. I would feed on my weaknesses. It was like an obsession finding one fault after another. The whole world seemed to work against me, and there is no way to win. I felt defeated, always. No hope.

My bouts of depression would last weeks. I don't know exactly what would trigger them, and I'm not sure why I would get out of that state of mind either. All I know is that I would promise myself that it would never happen again. That depression is completely selfish (because it is) and that I was over that. Then....I'd get depressed again. And you know what? That demon would whisper in my ear "I'm back. I knew you couldn't get rid of me. You know why? Because you are not strong. Because you are a failure. The fact that you're in this depression proves that you can never get rid of me. You will always be too weak. you will never win." Then somehow I'd conquer it. I would go sometimes a whole year without being depressed thinking I had defeated it, only to fail once more. Each time it got worse. Instead of taking weeks to get me into a suicidal state of mind it would only take days. 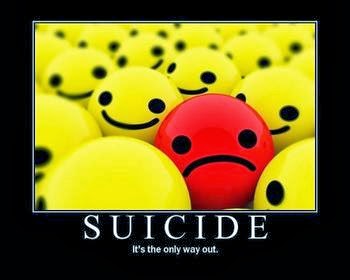 The scariest thing is driving. Temptations to purposely crash the car are at every turn. It would be so easy. But what if I lived? That would suck. Then I'd be disabled and really get depressed. Think about that! I didn't want to try to kill myself by crashing my car because I was afraid I would FAIL, that I couldn't even kill myself right. I thought I couldn't do anything right.

It took me until college to go see a psychologist. I was about 23 years old. I was sick of the cycle and I wanted to learn ways to avoid it. It was a great experience. He taught me a lot about myself. I recommend it to everyone. 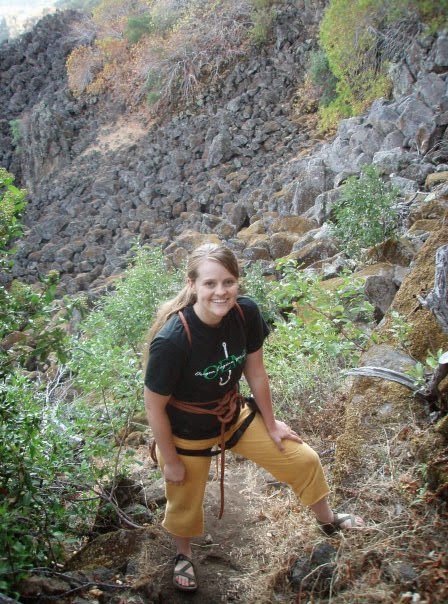 I got married and we were struggling to get pregnant. I had a B.S. degree and was working at Melaleuca. Soon I learned that they were paying all the men $9.50 and all the women $8.00 for doing the same job. For some reason that really took a toll on me. I was smart. I knew I was. I got straight A's in college. I was also a really hard worker. But I was worthless. No matter how hard I tried I was only worth $8.00/hr to the world. I was a piece of dung. Bitterness and despair took over. I almost sued, but I knew I couldn't win, I was a loser and always would be. My poor husband would come home to a crying wife almost every night. We would go to dinner parties and I would have to excuse myself from the table and step outside because I would start to cry for no reason at all. I was a mess. Then I wanted to run away. But then again where would that get me? I would just struggle somewhere else. 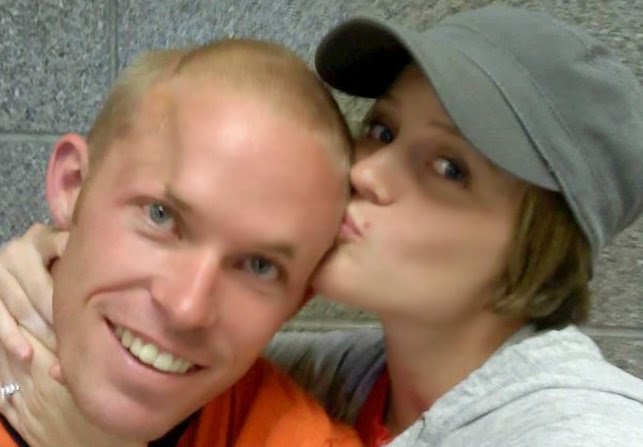 One night I realized that my depression wasn't just affecting me anymore, it was affecting my husband and it would my future children as well. I have witnessed a lot of negative outcomes of children who have severely depressed parents. I didn't want my children to have to deal with that. I finally succumbed to the idea that maybe I did need medication, that I couldn't beat this beast on my own.

I am now on medication and it's working. I want to be on it for the rest of my life. It just takes the edge off. My dose is small so I can still get depressed (which is rare), but at least I wont get suicidal, and that's my goal.

Recently I went to a seminar for depression. I loved the information the speaker gave. I scanned my notes so that you can see the scale he provided. The middle is "normal". To the left is severe depression, to the right is "happiness" which is measured by energy and vitality. 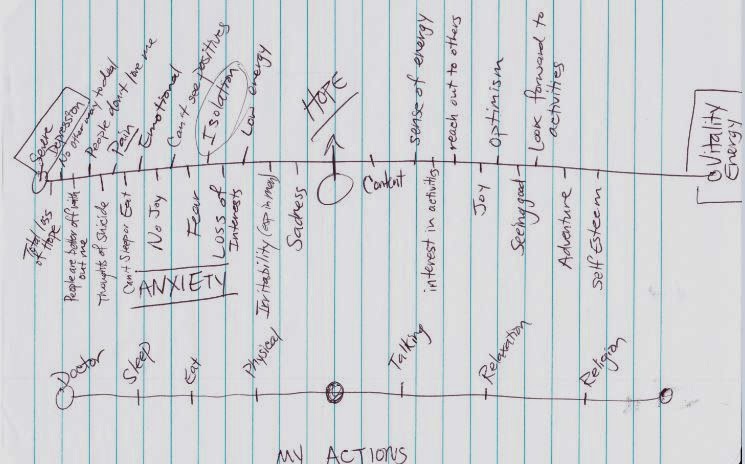 Something the speaker mentioned was that medication is usually needed once you're in the physical pain area. Once one has recovered to sadness then techniques can be used to go the rest of the way. The bottom line is knowing which actions the depressed person needs to take to fight the above symptoms.


I have been able to help a lot of people with their depression, and you can too.

Someone will never walk up to you and just blurt out that they are suicidal. Before that happens there are a few things you need to do first:

Some people have a hard time opening themselves up. So to open them up- the trick is- to open yourself up first. It starts a foundation of trust and an open relationship. How do you "open up"? Get Personal. Talk about some of the struggles you've had in your life. Ask them for advice. Ask them about their life experiences after you have shared yours.

2) Be an Open Book to Everyone

You never know who is struggling. I have always tried to be open about my depression at school, church, anywhere really. I cannot tell you how many people have opened up to me telling me that they are struggling too, and that they have never told anyone before. I also let people read my journals. Whats life for if you don't learn? Whats the learning for if you don't share it?

What if you've never struggled with depression? That's OK. People just need to know that you are human. That you will understand their shortcomings because you have them too. So be an open book about many things.

3) Complimenting is a No-No, Just Listen 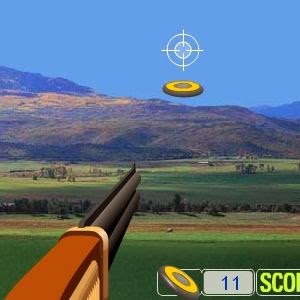 When you compliment someone who is truly depressed they are shooting your compliments down. Its like skeet shooting. Their depressed brain is the shotgun and the clay pigeons are your compliments. I don't know why this happens, I just know it does. You will not make them change their minds about themselves or increase their self-esteem by complimenting them. Instead, get them to talk, and keep them talking. By doing this you are helping them feel valued by taking the time to get to know them, and the reasons why they are feeling the way they are feeling. Keep asking probing questions. Dig. Show understanding and love.

There are methods and medications to help depressed people. If they have expressed to you that they have had suicidal thoughts get them to call a Suicide Hotline immediately. I have had to do this and it was very helpful because the person gave me some techniques to cope until I could see a professional. The number I used was on the back of my health insurance card, but there are many other resources as well. 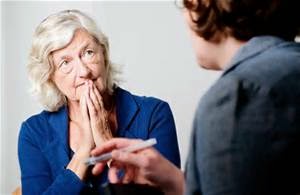 5) Continue to Have an Open Relationship

Ask them how things are going. Do they like their counselor? (If not, push them to get a new one. They are not created equally! I have had terrible counselors and wonderful ones). Be their friend. Serve them. Laugh with them. Share your life with them as well.

My favorite description of depression is on this blog: http://hyperboleandahalf.blogspot.com/2013/05/depression-part-two.html    WARNING it contains a lot of swear words.